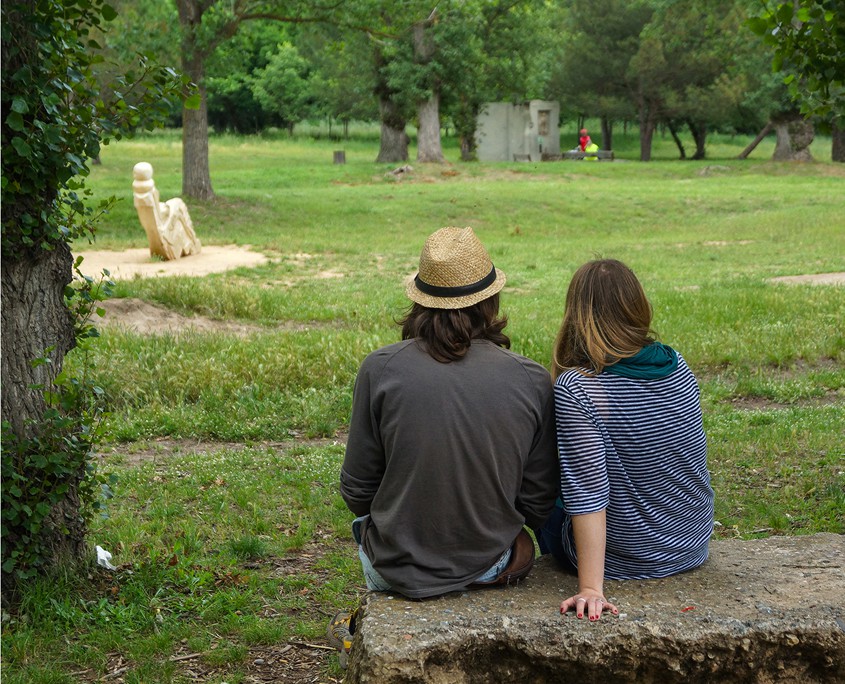 The Meadows and the orchards

We start walking through the old town of Salt. We are in front of Sant Cugat and head towards the Plaça de la Vila, where we can see the stones rounded by the river Ter that have been used to build the houses. We will also find three statues representing otters, an animal formerly very abundant in the Park and extinct in the middle twentieth century, which has returned thanks to reintroductions. We take the carrer Llarg, on the left, Lluís Aguilera street will take us to the Pont del Rec. The bridge crosses the Sèquia Monar, the current canal is the result of the adequacy work for the miller, agricultural and industrial use of a riera already documented in 833, which makes it one of the oldest sèquia in Catalonia. When we cross the bridge we enter into the Deveses park with a large area of Salt orchards on both sides, advancing along an elevated path. The Deveses Park had been an important grassy area, where the herds of lambs from the Pyrenees came down for the winter. The proximity to the city of Girona favored the sale of the meat and the slaughterhouses of the city were located in Salt. We arrive at the Women’s Laundromat and continue in the middle of groves to cross the Via Verda that joins Olot and Girona for cyclists and pedestrians.

Groves are tree plantations to take the wood. We leave on the left the old lake of les Fonts del Ter and continue straight to cross the Ter Petit, an abandoned course of the river where some rafts and wetlands remain. We arrive at a large, more open area and on the left we can visit the duck raft. To the right we enter the Pla dels Socs and the path takes us on the river Ter where we will see a lock with jetty. To the right we go all by riverside following the path until we reach some lagoons. We continue straight until we find the bike path and turn left to take the first turn on the right. This sidewalk in the middle of the orchards of the Guixeres takes us to the village, crossing again the Sèquia Monar. We arrive at the buildings of the old Coma Cros and take the street of Sant Dionís until we find the area again. We find the Parc del Rec Monar that will take us back to the Old Quarter.